How The FAA Got Our Goat And Sacrificed It! 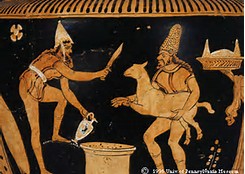 We have just witnessed one of the great betrayals in American aviation history. Working swiftly and in total secrecy, the Federal Aviation Administration threw the century old Santa Monica airport (SMO) to the wolves at City Hall. We are simply stunned that the very agency charged with protecting and promoting American aviation would act with such calumny and such finality to resolve the outstanding issues at our airport, issues that are harbingers that bode ill for every general aviation airport in America.

America’s general aviation infrastructure was built at one fell swoop following WWII when an insightful and far thinking Congress, through the Surplus Property Act, gave cities across the nation expanded and improved airports with the simple proviso that they run them properly and keep them as airports (the actual language in the Instruments Of Transfer said simply “forever”). Up until Douglas Aircraft departed for larger, greener pastures, the city was happy to have its airport, but the realization that they were sitting on the last big piece of undeveloped land in the city, and some of the most valuable real estate in California began to turn their heads and set them seeking to trade the long term good for the short term gain.

The City attempted to evict the tenants and close our airport once before back in 1980, but were stopped by the FAA who cited the terms of the Surplus Property Act and drafted an operational agreement that would last for 30 years. That agreement ended in 2015.

Over the years, the City, always chafing at having to maintain an airport on such valuable land, has employed every tactic they could think of to hamstring operations and make the airport less attractive and less useful to aviation. This has resulted in various aviation interests filing lawsuits and other legal actions to protect their livelihoods and investments.

The City finally decided to challenge the validity of the original Act of Congress by suing in Federal Court. This and at least seven other actions were in play when the FAA and the City met secretly and agreed to allow closure of the airport in 2028 and the immediate shortening of the runway by 30%. Aviation interests at his airport and across the county had been working closely and continuously with the FAA to resolve the problems at Santa Monica Airport and were doing so even as this backroom deal was going down. The bad faith that our Federal Government has demonstrated leaves us shocked and saddened at our betrayal. This was a total disfranchisement of aviation and we are determined to get it set to rights before irreparable harm is done!

This FAA action puts general aviation airports across the United States in jeopardy, for now who can trust the FAA to protect them? Will our airports be sold out and sold off one by one until there is nothing left but giant carrier airports like LAX? We believe that as goes SMO, so goes the nation. Fate has put us on-point in this 21st century battle for the future of American values and what it means to be citizens of something bigger than our own hometowns. The fight has become more important than ever, and we are determined more than ever to see justice done. This time above board and in broad daylight.