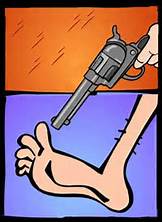 Forging ahead with its policy of seize and resist the City attempted to evict  Atlantic Aviation and American Flyers–the FAA responded with cease and desist. Last Tuesday, December 13, the FAA exercised its authority under the Code of Federal Regulations to shield two business tenants and the flying public at Santa Monica Municipal Airport from the consequences of the most recent of the City’s careless and reckless assaults on its own airport. This protection took the form of an interim cease and desist order which enjoins the City from further action until such time as the FAA can finish with its scrutiny of City airport policies which began with a formal Notice of Investigation (NOI) two months ago.

The City action which precipitated this response from the Federal Government was its attempt to evict the two Fixed Base Operators (FBO’s:Atlantic & American Flyers) who supply essential services to the aviation community that use the Airport (SMO) without making suitable arrangements to assume all of those duties themselves as is required under the Federal law.

In order to evict the present FBO’s, the City would need to be able to assume all the activities currently carried out by those businesses. As the FAA points out in the C & D order, the City has made no credible attempts to put together the resources (some of which require considerable time and expenditure) to do that and, hence, if the FBO”S were forced out, the City could not provide the services and meet its obligations under the law–plain and simple.

Some folks believe that was the City’s real plan all along based on its publically proclaimed intention to remove all aviation services from the airport to facilitate its closing by strangling it. The FAA is evidently taking this threat seriously and has moved to maintain the current state of affairs until such times as the truth can be ascertained. That is straight forward and to the point–a sober and deliberate act to protect those for whom it is responsible as a Federal Agency. It is foolish not to believe that the FAA is committed and serious about this–they are not "bluffing" as Mr. Hernandez would have us believe.

The thing that is peculiar is the City’s response as articulated by the Mayor Mr.Vasquez  and echoed by the City Manager’s dog’s body Mr. Hernandez. There appears to be a willful mis-interpretation of the law and an attempt at misleading the public. The Mayor says with regard to the order: “We are disappointed, but not surprised...” This implies that they knew that they were acting in bad faith and would be brought to task for it but they don’t like being caught. So why on earth did they choose to do it? It always hurts when you shoot yourself in the foot.

Mr. Hernandez also cites an ignorant and foolish blog by a one-time air traffic controller Jim Lewis: “You may find reading the link below interesting.  It is the opinion of a former FAA official.  No endorsement of his analysis by the City is implied.”,(but, of course, Lewis gets paid when you click on his blog). Note the disclaimer. The author in question is not a former FAA “official”, but rather, just a guy who worked in a control tower (just because you work in a Hospital doesn’t make you a doctor). He is confused about the applicable law and his contention that the FAA is “bluffing” is merely ignorant bravado, yet he is one of Mr. Hernadez’s many dubious ‘experts’.

What the City chooses not to recognize is that their claim to the airport land comes with certain provisos, one of which is that it must be used for a functioning airport. That is the contract the City signed with the Government of the United States 7 decades ago. The City is welcome to run the airport and reap the considerable income it provides to the city coffers, but it is not allowed to close it and deprive the rest of the country of an important piece of its aviation transportation infrastructure. It is not an exception or particularly unusual–the City doesn’t own the freeways within its boundaries, either. That is the crux of the matter.

The FAA is not pledged to protect private business or municipal interest. It is charged with protecting the public’s access to our nation’s greatest resource–our American airspace–our spacious and halcyon skies, and they are doing a good job. We commend them.