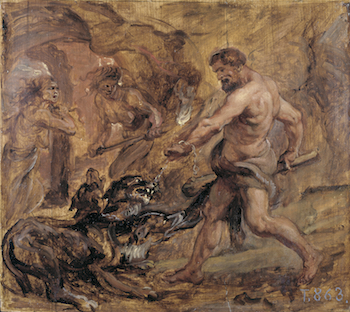 In ancient times there was a three-headed dog, Cerberus, who guarded the gates to Hades. One of the twelve labors of Hercules was to capture this beast and sequester him. The beast has escaped time and again throughout history since, and currently, under the name Credulous, guards the Council Chambers at City Hall. His heads are: Noise, Pollution, and Safety, and from these rabid jaws the City Council would fain save us all.

Why would anyone want to keep such a noisy, barking dog? They don’t want to, of course, but they must. You see, without these three made up menaces, their efforts to close the airport would look like the insanity that it is.

The first head of Credulous, Noise, has a big bark, but no teeth. Our airport is one of the quietest general aviation airports in America. It has an extraordinary compliance rate with the rigorously enforced noise abatement rules and regulations. The noise footprint outside of the airport boundary is held at 65 dBls or lower. What few complaints that come in from the neighborhood are generated almost entirely by two households.  Pilots using the airport are encouraged to choose flight paths that lessen the noise impact on the community. Santa Monica Airport is a good, quiet neighbor as can be clearly seen in the Airport’s monthly noise report to the Airport Commission.

The second head of Credulous is Pollution and has the foulest breath of the three. Acre by acre, Santa Monica Airport uses the least resources and produces the least waste of any city land. Studies by the Federal Government have found zero evidence of pollution at the airport as have city core drillings done just this year. Exhaust from cars and trucks are many orders of magnitude greater than anything the airport produces. Although there is lead in aviation fuel for piston aircraft, the EPA can find no elevated levels of it around the airport. This will become moot in a couple of years anyway when new reformulated fuels become available. There is no significant pollution problem at the airport.

The last head of Credulous is Safety-it is blind. This head yaps incessantly about safety in a city where no citizen has been injured or killed by aviation in the airport’s 100 year history. On the other hand, Santa Monica is the number one most dangerous city in California for pedestrians.

The City government spreads these falsehoods because they have, otherwise, no excuse for trying to close the airport and grab the land for development.

H.L. Mencken explained it all to us 94 years ago: “...the whole aim of practical politics is to keep the populace alarmed (and hence clamorous to be lead to safety) by menacing it with an endless series of hobgoblins, all of them imaginary.”

Recall that another of Hercules twelve labors was to clean out the Augean stables. We believe that you cannot run a great airport in a dirty city so I guess we all know what lies ahead. Put on your hip-waders and roll up your sleeves!