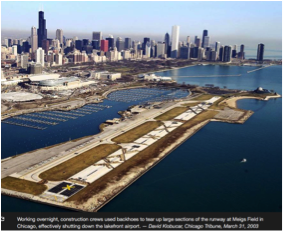 We all remember Chicago’s Meigs Field, destroyed overnight by unaccountable politicians. It’s happening again in Santa Monica where the century old airport, an irreplaceable piece of the nation’s transportation infrastructure, has just been given away in a Consent Decree by the FAA with no user input. (document)

One of America’s crown jewels is being pried out of its setting by a heedless bureaucracy–this must be stopped.

This action directly contravenes the Surplus Property Act established by Congress after WWII to ensure the America would have a robust air transportation network.

We need your help in righting this egregious error. Join us at Santa Monica Airport Association (SMAA) as a “National Supporter” with a donation of  $25 to help finance the fight to keep SMO working as part of our national airport and airspace system and reverse this dangerous precedent. International supporters are also most welcome.

SMAA believes that Santa Monica Municipal Airport is a bellwether that speaks to an issue larger than just one airport in one city and one state. We are enlisting the help of aviation supporters nationwide at all levels to help us get the job done.

Don’t let greedy politicians and backroom government deals sell out our nation’s airports. Please help us prevent SMO becoming the next domino in a cascade of destruction that began with Meigs Field. The SMAA is working hard with its national allies to nullify this betrayal before it is too late. Will you join us and help save SMO and protect our access to the national airspace? Together we can keep America great.